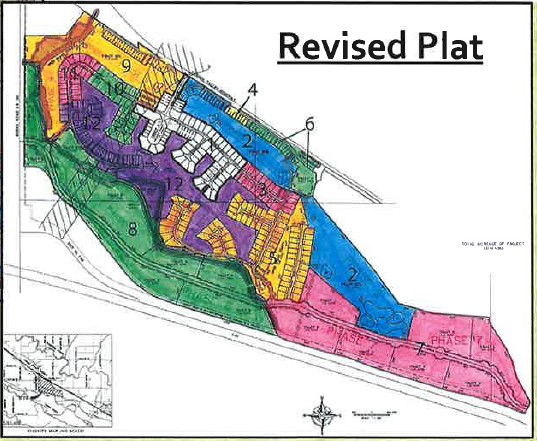 There’s still much work to be done, but the Vintage Valley Parkway extension project in Zillah is now less than nine months away from completion.

Work on phase one of the extension, located north of Interstate 82 between Buena Road and the existing Vintage Valley Parkway, started early this year and could wrap up by the middle of 2021, city officials said.

A number of commercial projects are already taking shape along the new stretch of road —including a new Burger King restaurant — while the construction of 364 residential units will begin sometime next year.

“There are a lot of folks who have been waiting for this road to be completed, and we are expecting it to create a big influx of commercial and residential uses,” Zillah City Administrator Sharon Bounds said.

Asphalt has been laid on about half of the extension, but construction crews have been winding that down this month as temperatures have dropped.

Granite Construction is the lead contractor on the $8 million project, which is being funded through a Federal Highway Administration grant, plus funds from the State Transportation Improvement Board (TIB), Supporting Investments in Economic Development (SIED), and developers.

“They’ve slowed down now that it’s gotten colder, but we should still be finished by late spring or early summer,” Public Works Director John Simmons said.

That’s exciting news for Zillah residents, but it’s also something I-82 travelers can look forward to. Instead of having to drive a couple miles off the highway like in neighboring Toppenish, motorists will be able to easily access new and existing businesses.

“The new road is attractive, not just because of its locale but also because of its visibility off the freeway,” Bounds said. “You’ll be able to see all of the commercial development when you’re driving by and be able to access it at the next exit. It’s going to be very inviting.”

After seeing some other small commercial developments pop up around town in recent years, Zillah — with a population of roughly 3,200 — is in the midst of a modest growth spurt. The addition of more than 360 residential units will no doubt accelerate that growth.

From a planning perspective, the city is simultaneously trying to grow and keep up, said Ardele Steele, the planning and community development director.

“Over the past decade, we have gone from being a top-heavy residential community to looking for more of a commercial/residential mix,” she said. “That has added a lot more amenities to the community, and now, people don’t have to drive everywhere (to find goods and services). We’ve been able to keep more dollars at home.”

While the extension has already been attracting interest from commercial clients, the road remains quiet for the time being since no vehicle traffic is yet allowed. A walking path is also taking shape along Vintage Valley Parkway, giving recreational walkers in town a new exercise outlet.

“The nice thing is that when the road is built, people will be able to use the walkway,” Bounds said. “We have a lot of walkers in Zillah, and they will take advantage.”

In addition to the road extension, a 10-foot-wide lighted path along Vintage Valley Parkway is slated for completion by mid-2021. Steele said the path will be added to the Yakima County Trails Plan. The Yakama Nation is also hoping to connect the walkway with its reservation-wide trails network.

Aside from the road extension and walking path, the city has been able to fund other amenities through the project, such as landscaping work, pole fixtures for decorative flags and Christmas lights, and the installation of a drinking fountain along the path.

Meanwhile, word has gotten out about business opportunities in Zillah. A new Dollar General recently opened on First Avenue, while a Yakima Chief Hops nursery with five large greenhouses is going in along Vintage Valley Parkway, near Burger King.

“Even in COVID times, we’re seeing a lot of commercial movement along that section of road,” Simmons said.

City officials also noted that the road extension will provide much-needed secondary access to I-82 for the residents of the Zillah Lakes development. The only way to reach the development now is through Buena or along the Yakima Valley Highway.

“That was a big piece of the puzzle,” Steele said. “With this road, they will be able to move on to phase two of their project, and that will drop about 150 residential lots onto the market. It will also open up some new commercial tracts.”

Steele added that the final plat of residential lots won’t be completed for 12 to 18 months, but the development fits well with the city’s long-term growth plans.

“The initial plan was to add even more housing, but this still gives the city a number of new housing opportunities,” she said.