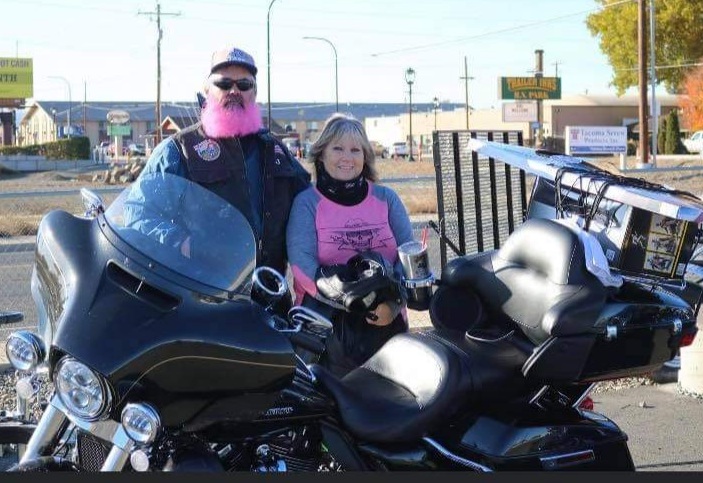 If you see a guy with a pink beard cruising down the highway on a Harley this fall, don’t be surprised.

For the third year in a row, D.J. Blankenship of Konnowac Pass will be dying his white beard pink throughout the month of October to show support for Breast Cancer Awareness Month.

“Three years ago, my co-workers bet me $5 that I wouldn’t dye my beard pink for cancer awareness,” he said. “I’ve done a heck of a lot dumber for a heck of a lot less, so I figured, ‘why not?’”

In an effort to build community support for the Memorial Foundation’s cancer fund, Blankenship will begin every morning in October by applying a spray-on pink dye to his beard, with help from his wife, Renee.

The first year brought in $400 in donations, while last year’s haul increased to $3,000. Blankenship said he’s not expecting to top that number this year due to the economic uncertainty many people are experiencing due to COVID-19.  But he still expects plenty of community support.

“I’m not setting any goals,” said Blankenship, 62, a Yakima County roads division employee. “If you have a dollar to spare, I would appreciate it. But I’m not going out looking for donations. I’ll put it on Facebook and people can help out if they can.”

Blankenship said what he has enjoyed most about the past two Octobers are the nods of appreciation he gets from others when he’s at work or out shopping. He said it means a lot to him when people tell him “thank you” for what he is doing to promote breast cancer awareness.

“I’m pretty outgoing, so this is fun for me,” Blankenship said. “I’ve done things like this ‘just because’ — like eating two Miner’s burgers in 15 minutes. But now, I have a purpose.”

According to breastcancer.org, breast cancer kills about 42,000 women in the U.S. every year, and early detection has been shown to be essential for survival. Blankenship’s late mother-in-law, Babe Christman, survived a diagnosis more than 40 years ago, and his longtime friend, Carrie Story — co-owner of Ideal Lumber in Toppenish — also overcame the disease.

“It seems like everyone has a mother, grandmother, aunt or sister who has had this disease,” he said. “Maybe they’re still with us, maybe they’re not. But when you start talking to people, you realize how many people it has affected.”

So when you’re driving down I-82 or Highway 97 next month, keep your eyes peeled for the pink-bearded biker with a heart of gold. After adding a few inches to his beard since last year, Blankenship figures to stand out even more than usual.

“I’ve been growing it for a while, so it’s pretty noticeable,” he said, adding that the beard “flops around pretty good” when he revs up his Harley Davidson to 70 mph. “People always ask me about the beard, and that gives me a reason to talk about cancer awareness. That’s what this is all about.”