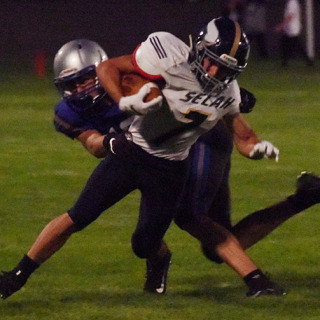 School is back in session and the leaves are beginning to turn. But one thing is conspicuously missing from our lives this fall: high school sports.

In most years, the Selah High School football team would be wrapping up its non-conference schedule, preparing for CWAC play to begin. The Vikings’ volleyball and girls soccer teams would be gearing up for league competition, and the cross country runners would be rounding into midseason form.

Instead, Selah student-athletes must continue to train by themselves and hope for a reprieve next spring, when the traditional fall sports season is expected to take place.

Due to ongoing complications from the COVID-19 pandemic, the Washington Interscholastic Activities Association (WIAA) released a modified schedule this summer that would stage football, volleyball, girls soccer and cross country events in March and April. Winter sports will run from late December to late February, and spring sports teams will play in May and June.

“Right now, we don’t have any team-organized conditioning or practicing going on, but we have full intentions of getting small groups together as soon as we hit phase 2,” said Selah High Athletic Director Jake Davis, who has been involved with reopening plans on the state and local levels since the pandemic started last winter.

“We’re in what’s called a ‘dead season’ right now, and there’s no coaching allowed,” he added. “But we are hoping to create a ‘summer season 2.0’ from Sept. 28 to Nov. 30 so we can get all of our athletes back to training with their coaches.”

One challenge the Selah coaches will have to confront later this fall is how to accommodate multi-sport athletes when training sessions can (hopefully) resume Sept. 28. Some athletes will be gearing up for basketball or wrestling in January and February while also preparing for football, volleyball and soccer in March and April.

Baseball, softball, boys soccer, and track and field will follow on the heels of the modified fall season, which doesn’t provide much, if any, transition time. Because each of the schedules will be condensed to about 70% of normal, there will be even more overlap than during a typical school year.

“We don’t want to wear the kids out going from one season to the next before they’re ready,” Davis said. “A lot of them have been sitting around, not doing a whole lot the past few months. The last thing we want to do is rush them out there to play multiple sports at one time.”

Davis credited the school’s athletic trainer, Courtney Peart, for developing a plan to ensure the student-athletes are ready when they get the green light.

“Courtney is planning to be at all of the practices and games, making sure the kids stay in shape and stay hydrated,” he said. “She’s going to play a huge role in this process.”

Davis also applauded his coaches for their communication and understanding of the safety guidelines set forth by the WIAA. He said the coaches have been keeping in touch with their athletes, passing along regular updates to them and their families.

Some have also been asked to provide emotional support for their athletes, many of whom are still reeling from the cancellation of the spring season. Even with so much upheaval since March, Davis said everyone in the SHS athletic department has demonstrated how much they care about their students.

“We have a fantastic coaching staff, and I’m extremely thankful for their work during the past few months,” he said. “The well-being of our athletes always comes first, and we all know how important sports are to them. We also know how important sports are to their physical and mental health. We want to give them an opportunity, and as soon as we are allowed to, we’re going to do that.”

Davis understands the current situation as well as anyone, having served on a number of committees, both in the Yakima Valley and through the WIAA. He said those experiences have helped him prepare the Selah coaches and athletes for what the future may hold.

Even as the pandemic persists, he remains optimistic that competition can resume by the end of the year.

“I think Dec. 28 is a realistic goal,” Davis said of the tentative date for starting basketball, wrestling and boys swimming. “I applaud the WIAA for making the decision early and giving all of the schools a target date to shoot for. We all have to realize that this isn’t normal and it’s not going to last forever. At this point, we need to be grateful for whatever we can get.”